They found a perfect fit

NINETEEN months ago, in the blink of an eye, Donald and Anne Haisman’s family’s life was changed forever. Unfortunately, it’s a situation all-too familiar for the Care Solutions team. But through all the frustration, anger, confusion and despair, the Haismans found unwavering support and unexpected sanctuary in Palm Lake Care. And a perfect fit in the greater Palm Lake Group.

In November 2018, Anne and Donald Haisman were visiting their son and daughter-in-law on the Gold Coast. It should have been a time of family fun and connection, as had always been the case when Mum and Dad came down to visit. In fact, the weekend started out just like that. Happy chatter, shared laughs, family bonding. But, in the blink of an eye, their fun weekend away became months of heartache when Don suffered a completely unexpected and catastrophic stroke.

“It was incredibly stressful,” recalls Anne, who spent eight hours a day by Don’s hospital bed. “After 12 weeks at the Gold Coast Hospital we had to make other arrangements but being away from our long-time home in Burpengary, I didn’t even know where to start.”

The couple’s son, John (along with his wife, Jane), was literally right by his parents’ side through the shock and sadness of that weekend and the months that would follow, with Anne supported at his Helensvale home while the family together sought a care plan for Don. John and Jane organised a visit to Palm Lake Care Bethania and while there was no availability at the time, the Haismans hit an even greater jackpot in finding Don’s ultimate care champion – Care Solutions manager Jacinta Sutton. It was Jacinta who suggested Palm Lake Care Mt Warren Park might be a better fit for the family patriarch and who has stayed in close contact with the Haismans ever since.

“From the moment we first arrived at Mt Warren Park, I just loved it,” gushes Anne.

Don has called Palm Lake Care Mt Warren Park home for 15 months now, and Anne says the Palm Lake Care team has made her family’s stressful year infinitely easier. In keeping with their name, the Care Solutions team has helped Anne in a variety of ways – even putting her in touch with an independent financial expert who helped coordinate Don’s Centrelink support.

“I haven’t had to worry about things one bit,” says Anne. “My daughter-in-law has also kept in contact with Jacinta, and I can’t say enough about the staff who have been looking after Don marvellously.”

And it has been quite a tumultuous time for the Haismans, with the impact of Don’s unexpected stroke compounded by the global pandemic that arrived just as unexpectedly on Australia’s doorstep. While abiding by government-imposed COVID-19 restrictions, Palm Lake Care was able to support Don’s need to have his family by his side as he himself continues to learn to navigate his new world. Large, plush, individual suites have always benefitted Palm Lake Care Mt Warren Park’s occupants, but during COVID-19 they benefitted Palm Lake Care staff by more easily keeping visiting family members socially distanced from residents. 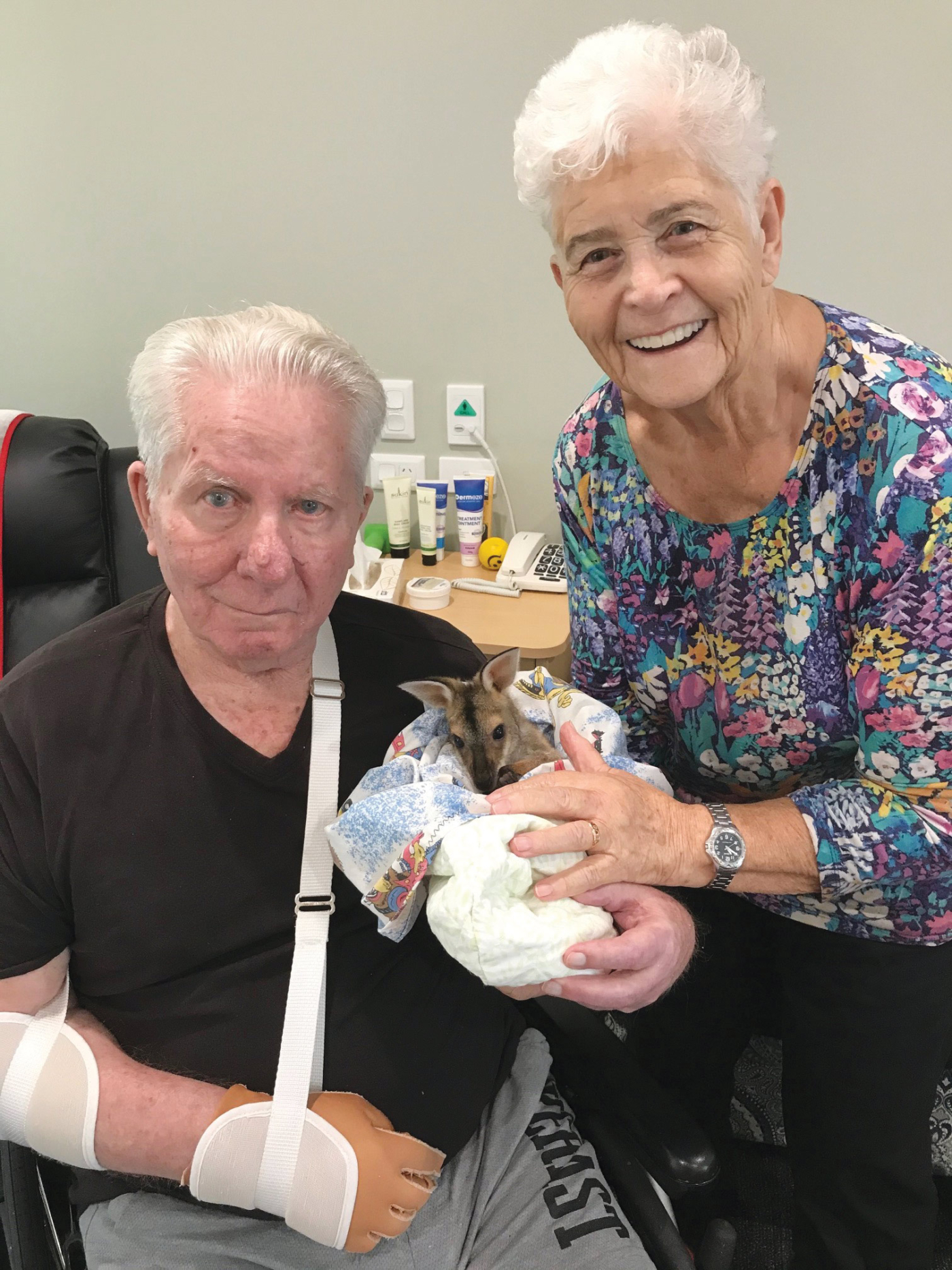 From one welcoming family home to the next

Anne and Donald lived in Burpengary, on Brisbane’s northside, ever since they permanently moved from England to Australia to retire, some 25 years ago.
“We had first moved out here when the children were much younger and we were true ‘ten-pound Poms’,” recalls Anne. “It was such a long distance to travel back and forth in those days that we went home to visit family and ended up living in England again. Don then got a good job with Exxon, but when he started going deaf in his left ear he told them the last thing he wanted to hear was the ocean in Australia and so they gave him an early retirement.”

Anne adds that when Don’s stroke took all of his senses down his right side, miraculously, his right ear retained its hearing.

“Since Don’s stroke, it has been hard being so far from Burpengary, which I know like the back of my hand. I can’t leave my son’s Gold Coast home without having someone with me, because I just don’t know the area. Over the past year, I have realised that both Don and I need to be somewhere that feels like home.”

Anne had heard through the grapevine about the Hamptons-inspired delight that is Palm Lake Resort Beachmere Bay. But it was when she learned that there would be a brand new Palm Lake Care aged caring community opening directly across the road, she knew it would be the solution their entire family needed – a perfect fit. Anne sold the family home and bought a wonderful new abode at Beachmere Bay which will keep her in the Moreton Bay region she knows so well.

“The support we have received from the entire Palm Lake team has been absolutely amazing, so I knew I myself wanted to stay within the Group. Having privately toured Palm Lake Care Beachmere before it opened to the public, I couldn’t be more thrilled – Don is going to be so happy there,” Anne says. “I don’t know how we have managed to get so lucky.”

While yet to move into her Palm Lake Resort Beachmere Bay home (she’ll follow Don north when he relocates to Palm Lake Care Beachmere after it opens in June), Anne admits she is nervous to live by herself for the first time ever but doesn’t think she’ll feel alone.

“There is so much to do at Palm Lake Resort Beachmere Bay and the people have been so welcoming already,” says Anne. “And, being just across the road from Don, I’ll be able to continue staying by his side day and night.”

As Anne admits, it’s like everything magically fell into place and Don is right where he needs to be. He’ll stay near Anne, he will continue to be supported by a team of experienced carers and welcoming neighbours, and he will be more than comfortable in his sparkling new Hamptons-inspired home right by his beloved seaside. Perfect.